“VIOGENEX” (VIOIencia de Gûnero a Extranjeras ã Gender Violence against Foreign Women) is a work group established to help foreign women who are or have been gender violence victims. This ground-breaking initiative in Spain was requested by the Foreigners Department at the Mijas Town Hall. This initiative was approved during the Local Security Assembly which took place in November 2016 as an answer to the need and the lack of information of foreign women living in our municipality as well as to coordinate that help and prevent new cases of Gender Violence.

To carry out this project the group counts on the collaboration of different public organisations and private associations who join forces to give the support these women in need. All these groups are coordinated by the Foreigners Department at the Mijas Town Hall:

How does VIOGENEX group work?

VIOGENEX holds quarterly meetings, arranged and coordinated by the Foreigners Department with the goal of improving and adapting the existing service to the diverse needs of the gender violence victims in Mijas and coordinate the actions between the organisations, units and groups. Depending on the agenda and the pending topics, the group invites representatives of different organisations to collaborate, for instance: the Women Institute, Junta de AndalucûÙa, municipal councillors from other municipalities, associations or the consular body of MûÀlaga. The group also increases the number of members depending on the needs and actions to take.

How does it work in case of emergency?

The Civil Guard and SIMA Local Police rely on groups of agents specialised in dealing and attending Gender Violence Cases. Furthermore, the SIMA Local Police offers the victims a follow-up on their case (Specially when the judge establishes a retraining order). Additionally, a group of volunteering interpreters have been created. They offer a translation and interpreting service. Said service is available in evenings, nights, weekends and bank holidays to help foreign women who canãt speak Spanish and need to communicate with the public administrations in charge, like the Civil Guard.

The Foreigners Department offers first hand attention to the victims who visit them in the office where they can help them in 4 different languages. They also offer advice and translation services at the Womenãs Centre for Equality and Social Welfare, Mijas Town Hall, Civil Guard and Local Police. On the other hand, The Department has financed the printing of posters, leaflets and stickers of the campaign ãYou are not aloneã, which they still promote on local media and through collaborations (e.g., with the company ãTaxi Mijasã).

Mijas Red Cross offers volunteers to accompany the victim so they are not alone during the emergency, transport transfer and clothes

Soroptimist International Costa del Sol in collaboration with Age Care and the Lions Club in La Cala de Mijas offer the victims accommodation in hostels, free food and clothes and they prepare an ãEmergency bagã for the victim and her kids.

VIOGENEX created a Whatsapp group with all the members of the group to facilitate the communication in case of emergency before and after the working hours.

How do the collaborations of the group work?

The group VIOGENEX collaborates closely with the Women Institute and the Junta de AndalucûÙa in the campaign ãYou are not aloneã, a free phone service focused on women who wish to get some information about how to identify a situation of gender violence, to learn more about their rights and the help available. This service is offered in 46 languages.

Likewise, VIOGENEX has publisehd and distributed thousands of informative leaflets in several languages, posters, stickers and a video in Spanish and English which is usually broadcast on RTV 340 of Mijas Comunicaciû°n and published on social media to promote and support the campaign ãYou are not aloneã.

It is a service to help these women, victims of gender violence since many of them feel lonely and desperate. The message is clear: YOU ARE NOT ALONE! 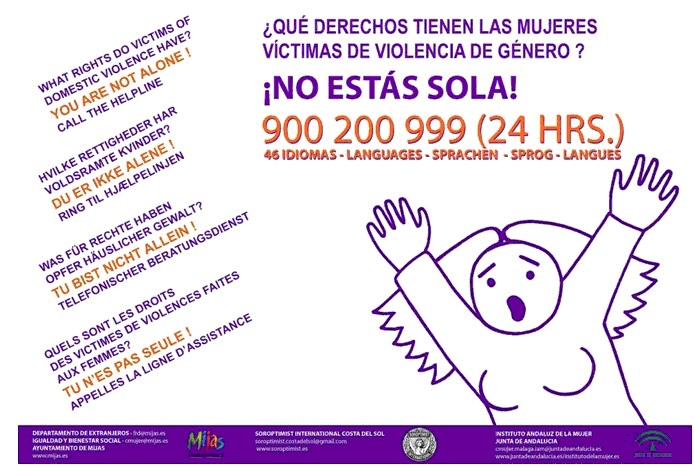 There are two very important phone numbers: one if for information for victims of gender violence of the Andalusian Women Institute: 900 200 999 ã 24hrs. and the emergency number: 112